I buy my green coffee from Ministry Grounds. Neil from Ministry Grounds offers a top notch service with an extensive range of exciting beans. He also sells handy coffee bits and pieces. And now, he’s offering a starter pack for students featuring the Aeropress and a Porlex hand grinder.

I don’t get anything for my ringing endorsement of Ministry Grounds – and the ad in the sidebar is something I offer gratis because I really appreciate the service.

I use the Aeropress for coffee at work – and when I’m travelling. It’s a terrific invention and you should get one.

Here’s a nice users guide from Has Bean (PDF) (which is one of my favourite coffee blogs and you should read it). 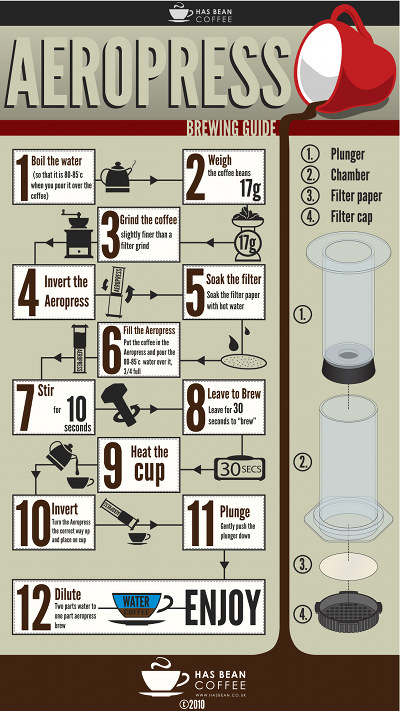 And a video too. Which is brilliant:

A Beginner’s Guide to the Aeropress February 6th, 2011Nathan
Sticky Post By Nathan Posted in Coffee Merchandise, How To Permalink

Amongst the really awesome presents I received this year were two most bits of coffee paraphernalia – a syphon with its own little butane burner thing, and an Aeropress. The syphon is fun, but has a pretty steep learning curve. I feel a bit like a mad scientist when I’m using it.

The Aeropress is just easy, and the perfect solution for making coffee away from home. So far I’ve used it in the office and on my in-laws farm. It’s also pretty cheap – and at $54 is a great entry to the home espresso quest.

Out of the box it’s designed to use paper filters. Which is nice, but if you’re after a more permanent filter solution, it comes in the form of these chemically etched filter disks from Coava…

Used as directed, Aeropress will provide you with something very similar to espresso (who are we kidding, it’s coffee brewed under pressure – it is espresso). But you can play all sorts of fun games and use it to make filtered coffee as well – here’s a tutorial from Coava themselves.

They used the same method to make a filter cone (which they’ve called a “Kone”).

You can buy the Aeropress from just about any good coffee retailer, you can get an Aeropress and a Coava Filter from my favourite online coffee store, and supplier of my green beans – ministrygrounds.com.au. For the ultimate in portable coffee you can get the Aeropress and Kyocera hand grinder as a package (for $133).

Kones are used in filter coffee makers like the Chemex. Which will be my next coffee frontier.