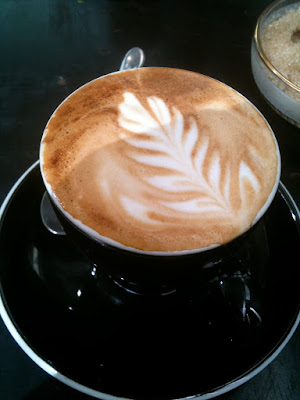 BlackStar was one of those places that lived up to the hype. I’d been meaning to get there for quite a while, having spent my four year exile from Brisbane reading about BlackStar on Facebook as my friends discovered it, and then entered a substantial relationship whereby it was almost all they could talk about.

BlackStar is a grungy garagey warehousey set up in West End. Its courtyard/dining/drinking area feature what must surely be chairs from old churches. I have memories of uncomfortable Sunday School lessons on such chairs. They don’t give you table numbers at BlackStar when you order, but rather little toys that you place on your tables. That was cute. They’re trying to contribute something to the cultural scene in West End, and they’re pretty actively supportive of local music and international human rights. Both good causes, and its nice to drink coffee with a clear conscience. It attracts a hipster clientele, and I felt a little out of place wearing a threadless T-Shirt and jeans, as some sort of ode to my latent capitalism. But I got by. It helped that the coffee was sensational. Rich. Dark. And earthy. It was so full bodied that it was velvety. Subsequent visits have confirmed BlackStar’s place in the top echelons of Brisbane’s coffee scene. The really nice thing about the number of quality cafes around is that they’re all offering something different, not just in their aesthetic, but in the cup as well. And if you want a coffee that will linger in the back corners of your mouth for hours, then BlackStar is the go.

Like many of the cafes you’ll find reviewed here – they roast their own beans, and they also deliver – by pushbike – around inner city Brisbane. I picked up a bag of their single origin Colombian beans, also delicious.